The Node Pro Single-Slot PCIe to Thunderbolt 3 Expansion Chassis from Akitio is equipped with two Thunderbolt 3 ports and one PCIe 3.0 slot. This enclosure uses two Thunderbolt 3 ports, each of which provides bidirectional transfer speeds of up to 40 Gb/s, as well as one full-height, full-length, double-width PCIe slot that operates mechanically at x16 and electrically at x4. The advantage of this enclosure having a PCIe slot is that it will allow PCIe cards to be utilized with systems that do not have any available PCIe slots, such as the 2013 Mac Pro. Common applications of PCIe expansion cards include SAS/SATA and Fibre channel host bus adapters and RAID controllers, video capture cards, audio interface cards, 10GbE network cards, RED Rocket-X cards, and more.
While one of the Thunderbolt 3 ports is used to interface with your host system, the other may be used to daisy chain up to 5 additional Thunderbolt 3, 10 Gb/s USB 3.1, and DisplayPort devices. Each Thunderbolt 3 port also delivers 60W of power, and a dedicated DisplayPort 1.2 interface supports one 4K / 60 Hz display. Additionally, the PCIe slot provides up to 75W of power, but additional power can be supplied up to 400W with a pair of 8-pin (6+2) PCIe connectors.
Akitio's Node Pro supports systems running Windows 10 (64-bit) and macOS 10.12.4 and later with a Thunderbolt 3 port. It operates using an internal 500W power supply that runs using 100-240 VAC at 50-60 Hz. Included is a Thunderbolt 3 cable and protection is provided by a limited 2-year warranty.

General Features
Four-Lane PCI Express 3.0 Interface
The PCIe 3.0 x16 slot accepts full-length, full-height, and double-width cards and provides a maximum of 75W of power. The four PCIe Gen3 lanes and the Thunderbolt 3 ports are capable of transfer rates up to 40 Gb/s, providing enough bandwidth for both the internal PCIe card as well as any additional Thunderbolt devices in the daisy chain.

Two Thunderbolt 3 Connectors with Power Delivery
The reversible USB Type-C connector enhances ease of use for connecting devices with a focus on minimizing user confusion for plug and cable orientations. The Node Pro also supports power delivery (PD) over USB Type-C, providing up to 3A at 5V, 9V, 15V, and 20V with a maximum of 60W of power to compatible laptops like the MacBook Pro (Late 2016) that supports charging through the USB Type-C cable. This allows you to recharge your battery even though the laptop is not plugged into any other power source.

PSU Fan
The fan for the power supply turns on and off automatically when needed.

Case Fan
The large fan at the bottom of the case pulls out the hot air from inside the enclosure, keeping the PCIe card cool during long hours of operation.

Mesh Panel
The mesh panel provides fresh air to keep the PCIe card cool and depending on the on-board fan of the PCIe card, can be used for air intake or exhaust.

Thunderbolt 3
Thunderbolt 3 brings Thunderbolt to USB Type-C at speeds up to 40 Gb/s, creating one compact port that delivers a fast and versatile connection to docks, displays, or data devices. A single cable now provides data and video bandwidth, while also supplying power to bus-powered devices. The Node Pro has two Thunderbolt 3 ports. The second port operates the same as a Thunderbolt 3 computer port by supporting Thunderbolt 3 (up to 5 daisy-chained), USB 3.1 (10 Gb/s), and DisplayPort devices.

DisplayPort
The dedicated DisplayPort connector makes it easy to connect an additional monitor to extend your workspace. This video output capability requires a Thunderbolt 3 connection to the computer and will free up the second Thunderbolt 3 port for Thunderbolt 3 (up to 5 daisy-chained), USB 3.1 (10 Gb/s), and DisplayPort devices.

Compatibility
The PCIe card must be compatible with the requirements for Thunderbolt technology. As the DisplayPort does not support DP++, so be sure to use an active adapter when using an HDMI to DisplayPort adapter. 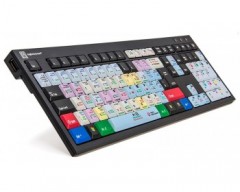 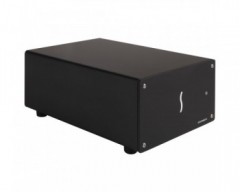 U-TAP SDI offers USB 3.0 connectivity including bus power and the ability to... 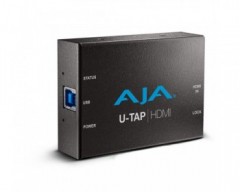 U-TAP HDMI offers USB 3.0 connectivity including bus power and the ability to... 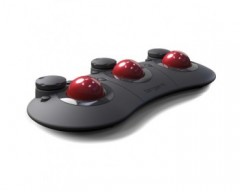 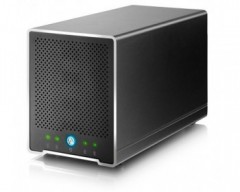 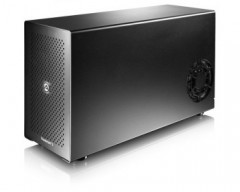 The Thunderbolt™ 3 eGXF box is a low cost expansion chassis designed to house... Blackmagic Design’s new Web Presenter allows customers to use their... 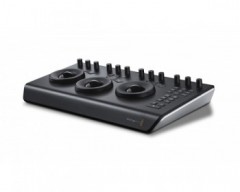 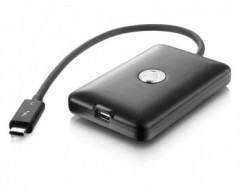 The AKiTiO T3T connects Thunderbolt™ devices with a Thunderbolt or... Sonnet Echo 11 Thunderbolt 3 Dock, connects your peripherals to your computer... 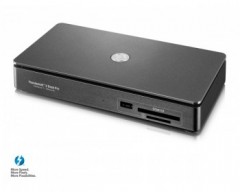 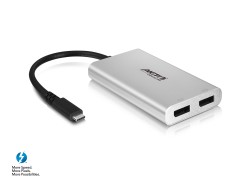 The T3-2DP connects up to two 4K monitors or a single 5K monitor with a... 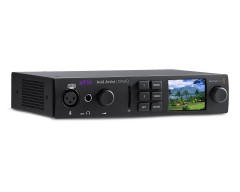 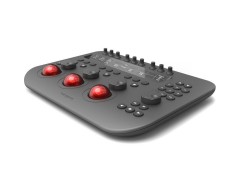 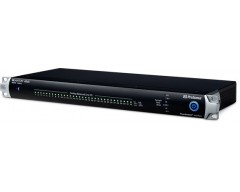 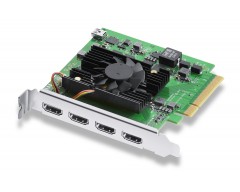 DeckLink Quad HDMI Recorder is a high performance PCIe card that lets you... 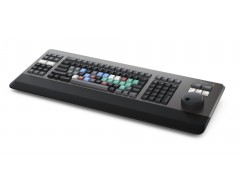 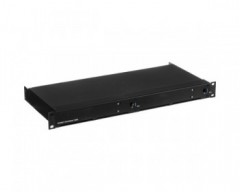 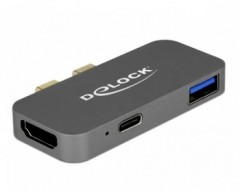 Delock Thunderbolt 3 Mini-Docking Station for Macbook with 5K, this docking...