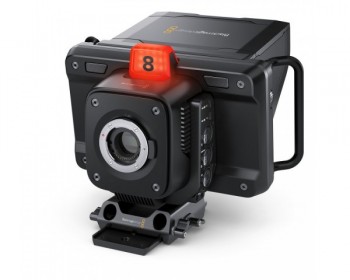 Add a powerful studio camera to your 4K broadcast with the Blackmagic Design Studio Camera 4K Pro. This updated compact and lightweight broadcast camera is designed for live production and provides a variety of options to record and broadcast your video. New features added to the Studio model include a lighter carbon fiber body, up to 25,600 ISO, 13 stops of dynamic range, a bigger tally light, HDMI output with camera control, 12G-SDI input and output, talkback within SDI, two USB Type-C ports for recording and control, a standard 5-pin broadcast headset jack, a speaker, built-in dual microphones, a 7" HDR LCD, a redesigned sun hood, and 10G Ethernet.

The camera offers UHD resolutions at frame rates up to 3840 x 2160p60. It is light for frequent travel, setup, and breakdown, yet durable for use in the field. It has a bright 7" capacitive touchscreen display that allows you to control all the settings right from the screen, and it features a 1920 x 1200 resolution, high-brightness HDR support for use in sunlight, and it has a detachable sun hood that was redesigned to fold down over the display for storage and protection. There are brightness, contrast, iris, and focus peaking control knobs on the sides of the display, and you can also program the F1-3 buttons on the side. The camera also features DaVinci Resolve built-in, so you can control the camera's color and brightness settings right from a computer when it's paired with a compatible ATEM switcher.

The Studio 4K Pro also provides features you'd expect to find in larger studio cameras, such as a large tally indicator with customizable number decals, talkback, a 5-pin broadcast headset plug, dual XLR audio input with phantom power, and 12G-SDI inputs/outputs. This camera also features HDMI output, and its new 10G Ethernet is an enormous pipe to use when broadcasting 4K video. You can even unplug all the HDMI and SDI cabling and utilize the 10G Ethernet to send all the video and data to a companion converter or switcher, which can even provide PoE to the camera, so you only need one cable. Its Micro Four Thirds lens mount allows you to utilize a wide range of professional photography lenses, and you can also control the lens remotely, broadcast style, with the optional Zoom Demand and Focus Demand lens controllers.

To power the camera, you can use PoE with a compatible switcher or the separately available Blackmagic Studio Converter, or you can use the included DC power adapter with a locking plug. It also has a standard 4-pin XLR power input for external sources to provide redundant power.

Compact and Lightweight Design
Large broadcasters use expensive studio cameras that are extremely large, so they're not very portable. The distinctive Blackmagic Studio Camera has all the benefits of a large studio camera because it's a combination of camera and viewfinder all in a single compact design. It features a lightweight carbon fiber reinforced polycarbonate body with innovative technology in a miniaturized design. The camera is designed for live production, so it's easy to track and frame shots with its large 7" viewfinder. The touchscreen has menus for camera settings, and there are knobs for brightness, contrast, and focus peaking. Plus, a tripod mount with 15mm LWS rod ports and mounting plate is included for fast setup.

Exceptional Low-Light Performance
In advanced cameras, ISO is a measurement of the image sensor's sensitivity to light. This means the higher the ISO the more gain can be added, so it's possible to shoot in natural light, or even at night. The Blackmagic Studio Camera features gain from -12 dB (100 ISO) up to +36 dB (25,600 ISO), so it's optimized to reduce grain and noise in images while maintaining the full dynamic range of the sensor. The primary native ISO is 400, which is ideal for use under studio lighting. The secondary high-base ISO of 3200 is perfect when shooting in dimly lit environments. The gain can be set from the camera.

Cinematic Images in Live Production
The amazing 4K sensor combined with Blackmagic generation 5 color science gives you the same imaging technology used in digital film cameras. That means you can now use cinematic images for live production. Plus, when combined with the built-in DaVinci Resolve primary color corrector you get much better images than simple broadcast cameras. The color corrector can even be controlled from the switcher. With 13 stops of dynamic range, the camera has darker blacks and brighter whites, perfect for color correction. The sensor features a resolution of 4096 x 2160, which is great for both HD and UHD work. Plus, all models support from 23.98 up to 60 fps.

Affordable Photographic Lenses
With the popular MFT lens mount, Blackmagic Studio Cameras are compatible with a wide range of affordable photographic lenses. Photographic lenses have incredible quality because they're designed for use in high-resolution photography. Plus, the active lens mount lets you adjust the lens remotely. To eliminate the need to reach around to adjust the lens zoom and focus, the optional focus and zoom demands let you adjust the lens from the tripod handles, just like a large studio camera. This means you avoid camera shake when adjusting the lens, so you can track shots and operate the camera without taking your hands off the tripod. It gives you the same feel as an expensive B4 broadcast lens.

Frame Shots with Large 7" Viewfinder
The large 7" high-resolution screen will totally transform how you work with the camera because it's big enough to make framing shots much easier. On-screen overlays show status and record parameters, histogram, focus peaking indicators, levels, frame guides, and more. You can even apply 3D LUTs for monitoring shots with the desired color and look. The touchscreen also has menus, and you can load and customize presets for different jobs. The included sunshade can be folded to protect the screen for transport, plus it's compatible with sunshades from the Blackmagic Studio Viewfinder.

Physical and Touchscreen Controls
Blackmagic Studio Cameras feature physical buttons and knobs, as well as controls on the touchscreen. Knobs on the right side of the camera allow adjusting of the brightness, contrast, and focus peaking. The focus peaking knob is incredibly useful as it lets you fine-tune the detail highlight, so you can get perfect focus as you zoom. The three function buttons on the left can have functions assigned to them, such as zebra, false color, focus peaking, LUTs, and more. Plus, you can change the function assigned to each button in the menus. The touchscreen also includes a heads-up display with the most important shooting information, as well as menus for all camera settings, LUTs, and custom presets.

Built-In Tally for On-Air Status
Blackmagic Studio Cameras feature a very large tally light that illuminates red for on-air, green for preview, and orange for ISO recording. The tally light also includes clip-on transparent camera numbers, so it's easy for talent to see camera numbers from up to 20' away. The Blackmagic Studio cameras support the SDI tally standard (on SDI cameras) used on all ATEM live production switchers and the HDMI tally used on ATEM Mini switchers.

Powerful Broadcast Connections
Blackmagic Studio cameras have lots of connections for connecting to both consumer and broadcast equipment. All models feature HDMI with tally, camera control, and record trigger, so are perfect for ATEM Mini switchers. You also get headphone and mic connections and two USB Type-C expansion ports.
Get Low-Cost Camera Control via HDMI
ATEM Mini switchers can control Blackmagic Studio Cameras because the HDMI output to the switcher has return data communication that can send control information back to the camera. All this means the camera operator is free to focus on framing shots.

USB Expansion Port for Accessories
The Blackmagic Studio Camera features a high-speed USB Type-C expansion port that allows you to record to external disks or connect to a wide range of accessories. Plug in an external USB flash disk and the camera can record high-quality 12-bit Blackmagic RAW files for later editing and color correction. That means you can just move the disk to a computer to work, and you don't need to waste time with file copying. You can even plug in optional focus and zoom demands to allow full lens control. Plus, the USB port will power any phone or disk that's plugged in.

Blackmagic RAW Quality
Blackmagic RAW is a revolutionary new format designed to capture and preserve the quality of the sensor data from your camera. Some file formats such as H.264 are highly compressed and add noise and artifacts, causing sensor detail to be lost forever. Blackmagic RAW eliminates this problem, so you get stunning images with incredible detail and rich color throughout the whole post-production pipeline. Blackmagic RAW also saves camera settings as metadata, so you can change ISO, white balance, and exposure later in DaVinci Resolve. Plus, the files are small and fast, so editing responsiveness is incredible. Only Blackmagic RAW gives you the highest quality, smallest files, and fastest performance.

Includes Built-In Microphones
Blackmagic Studio Cameras include built-in microphones, so you get sound included in the design, making the setup much faster. Plus, the built-in microphones are shock and wind resistant, so you get great sound even in tough conditions. With each microphone placed at the edges of the screen, you get the advantage of the studio camera design for better stereo separation than what is possible on a regular video camera. There's also a 3.5mm audio input for connecting video camera microphones, as well as a 3.5mm headphone jack.

Powered by Blackmagic OS
With the advanced Blackmagic OS, you get an intuitive and user-friendly camera operating system based on the latest technology. Blackmagic OS is a true modern operating system where all camera features run independently for smoother control, plus the camera powers on virtually instantly. It features the same controls and menus as other Blackmagic Design cameras, so you can move between cameras on set easily. The interface uses simple tap and swipe gestures to adjust settings, add metadata, and view recording status. You also get full control over advanced camera features such as on-screen focus and exposure tools, 3D LUTs, HDR, metadata entry, timecode, Blackmagic RAW settings, and more.

Supports 3D LUTs for Film Looks
When Blackmagic RAW files use logarithmic film gamma to preserve the camera dynamic range, 3D LUTs can be used to convert the images on the viewfinder display from looking flat and washed out. The 3D LUTs solve this problem because they convert the image just before it's displayed on the LCD. This allows the film gamma images being recorded to be converted to nicer-looking images on the LCD. The 3D LUTs are also saved into the Blackmagic RAW files, so they can be used in later post-production, but they are never burned into the Blackmagic RAW image data, so you always have the option to disable them. This means the 3D LUT is transported in the Blackmagic RAW file, but only used when you enable it.

Localized in 11 Popular Languages
The Blackmagic Studio Cameras are designed to be used worldwide so they support 11 popular languages. When setting up your camera, you can choose to work in English, German, French, Spanish, Portuguese, Italian, Russian, Turkish, Chinese, Japanese, or Korean. It's easy to switch to another language simply by going into the menu settings. When switching between languages, the on-screen overlays, heads-up display, and setup menus will be displayed in the selected language, and you can change languages any time you like.

Optional Accessories
You can utilize the Focus and Zoom demands to remotely control your lens and the Blackmagic Studio Converter for a single Ethernet connection to the camera. 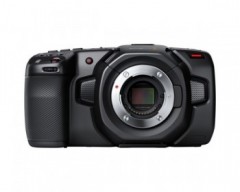 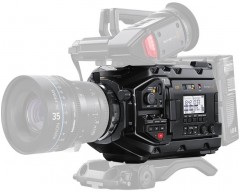 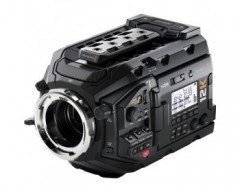 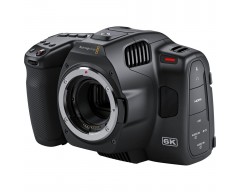 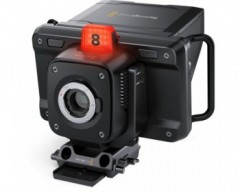 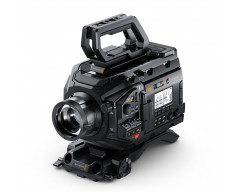 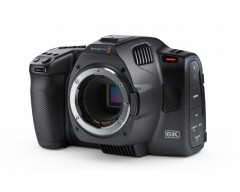