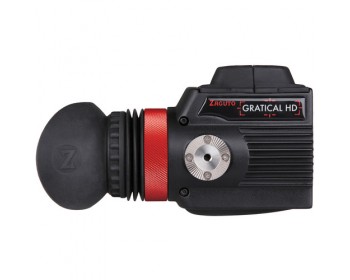 Rising far above the readily available generic EVF or LCD screen with a loupe magnifier attachment, the Zacuto Gratical HD Micro OLED EVF packs more display features and functions than is found in many much larger EVFs and on-camera monitors. At the heart of the EVF is a micro OLED panel about the size of your thumbnail with 5.5 million dots of resolution that produces an image with true blacks and a 10,000:1 contrast ratio, supporting RGB at 24-bits for vivid color rendition. You can choose to display a 720p image within the full resolution display of the OLED and then display the various scopes and signal displays outside of your picture area, which allows you to have an unobstructed view of your image while being able to see a waveform or histogram display of your image.

The EVF incorporates both SDI and HDMI loop-through inputs/outputs and can cross convert from HDMI to SDI. It also supports peaking, false color, and test pattern generation as well as LUT creation and import. You can also select to view/display audio meters. The unit features four user-programmable buttons for often-used menu selections, and supports multiple frame rates. Zacuto has designed the entire optical path, providing a diopter that is adjustable from -1 to +4. The optical path includes an automatic light trap that can prevent damage to the EVF from accidental exposure to direct sunlight. Incorporating an ARRI compatible rosette and a 1/4"-20 mounting hole provides a variety of means to mount the EVF to your camera. The EVF powers from a single LP-E6 type battery, and this 1800mAH battery provides approximately four hours of constant run time.

The 1280 x 1024 resolution of the OLED allows it to display a 1280 x 720 image and various diagnostic displays without needing to overlay the signals over the image. You can adjust the position of your image and displays to what suits you best, or you can also choose to overlay the diagnostic signals on the image.
You can create and store LUTS within the EVF and apply individual LUTS to either or both the EVF display and the downstream video.
The OLED display and outputs are independent of each other, which means you can display the video signal with one LUT on the EVF and send the video signal with a different LUT to an external monitor. Likewise, you can display the various test signals and diagnostic signals either on both the EVF on a downstream monitor or either one or the other.
Weather resistant covers prevent moisture or debris from getting in open ports.
You can choose to display audio meters in the EVF.
LUTs, test patterns, scope displays, and other display functions can be displayed in the EVF or simultaneously on the downstream video. You can select to have the EVF and the downstream video display different LUTs and/or display functions as well.

Scopes
The waveform provides an objective evaluation of your video signal. It displays the brightness of your image on an IRE scale, allowing you to see if your image will clip and where your black levels are.
The Vectorscope displays the signal on a graph so you can check the phase of your colors. The Vectorscope function also verifies and checks the overall tint and hue of an image.
The Historgram view allows you to see where your pixels are distributed in the spectrum of black to white, providing a quick way to see where your exposure values fall. You can choose to display the Histogram as either RGB or Luma.
False Color
The False Color feature provides under/over luminance warning by presenting the image as a series of color values representing exposure.
Peaking
Peaking highlights the sharpest (most in focus) areas of the image with a color outline.
Zebra
Provides a crawling black and white pattern overlaying areas that exceed the brightness levels you select.
Frame Store
You can store frames within the EVF to recall them at a later time. You can also adjust the transparency of the frame store and superimpose it on the current view when you need to align shots.
Test Pattern Generation
The EVF can generate color bars and a Macbeth color chart 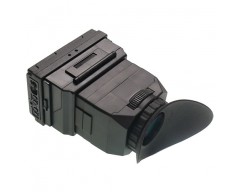 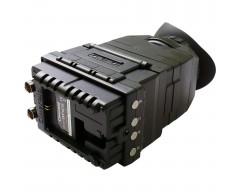 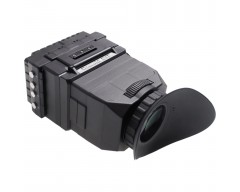 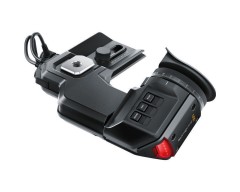 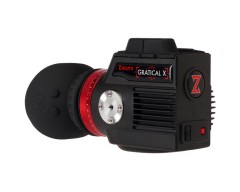 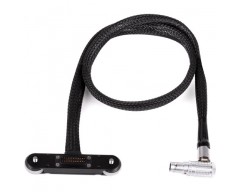 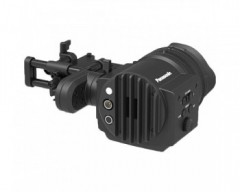 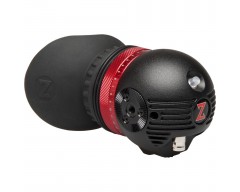 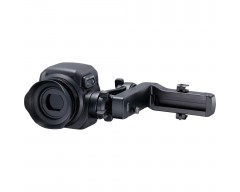 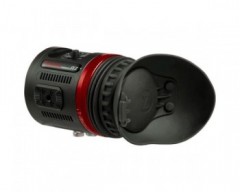 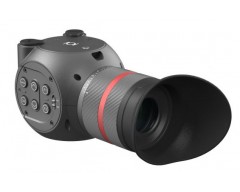